Skip to content
This letter was written by Judson W. Daniels (1838-aft1920), a farmer born in Geneva, Illinois, whose father was from Ireland and whose mother was from Vermont. Judson enlisted as a private in June 1862 in Co. D, 23rd Massachusetts Infantry, and remained in the service until June 1865, mustering out with the regiment at Newbern, North Carolina. After the war he married Ellen Maria Cooley and moved to Wisconsin.

The letter is a response to an enquiry by the family for additional details on the death of Charles Chase (1841-1864) who served with Judson in Co. D, 23rd Massachusetts Infantry. Charles was killed in the Battle of Cold Harbor on the late afternoon of 3 June 1864. Prior to his enlistment in August 1862, Charles had worked as a clerk in Boston. Charles’ parents were Thomas Nathanial Chase (1808-1866) and Esther M. Daggett (1811-1887) — residents of Buckfield, Oxford county, Maine.

From the letter we learn that Charles’ chum in the 23rd Massachusetts was John S. Patch. John was taken prisoner in the Battle of Drury’s Bluff and was paroled in December 1864.

[Note: This letter is from the personal collection of Richard Weiner]

Yours of 24 inst. rec’d this morning and I hasten to give you what information I can in regard to your lost brother. ¹ I was in the battle with him, altho not in the ranks. I had been detailed on the “stretcher” a few days previous. It was on the morn of the 3rd when our Corps took its new position and the First Brigade was ordered to charge. I was with them at the onset, but of course when the first man fell, it was my duty to take him to the rear. When I returned they had made the unsuccessful charge and fallen back to the brow of a small elevation. I then crawled to the front as far as any human being could and live and carried out the dying of my comrades, but Charley among many others of the regiment was missing. I have found no one who knew him that saw him fall. All I can learn is that he was in his place, made the charge, and did not return. After they had lain four days, we were permitted by flag of truce to bury our dead and among them I recognized one of two by peculiarities in dress but did not see anyone whom I could call Charley. But as there were 12 or 15 stretcher corps at work, there was but a chance for my corps to have seen him anyhow. The rebs told us that they had taken in some of our wounded but from the situations I think none could have been of the 23rd for where we could not go, I’m sure they could not. Therefore, I must say — however painful it may be — that he is no more. Poor fellow. He was a good boy and although not as tough as some, he was a good soldier, liked by all, and always ready when wanted, if able. There was none I thought more of than Charley for he was what many in the army are not — a gentleman.

I take pleasure in serving you as you request to the best of my abilities. My little information is not couched in “form” — for the shells are flying round so and throwing dirt over us and the cannons roar. The crack of the occasional rifle nearby and the confusion of voices beside me tend so to confuse my ideas that I must ask you to accept this, awkward as it is. Whatever trinkets or photographs he might have had was lost with him. His particular chum, John S. Patch, of whom he has spoken to you, was lost at Drury’s Bluff, is I think in Libby [prison].

¹ Judson never refers to the recipient of this letter as anyone other than “Mr. Chase” but he does refer to Charles Chase as “your dear brother” so it was probably written to either Roscoe G. Chase (1837-1920), George H. Chase (1844-1915), or Howard Aquila Chase (1846-1925). It’s also possible that Judson may have meant to write “your dear son” instead and directed the letter to Charles’ father, Thomas Nathanial Chase. Unfortunately no envelope remains to aid in the identity of the recipient. 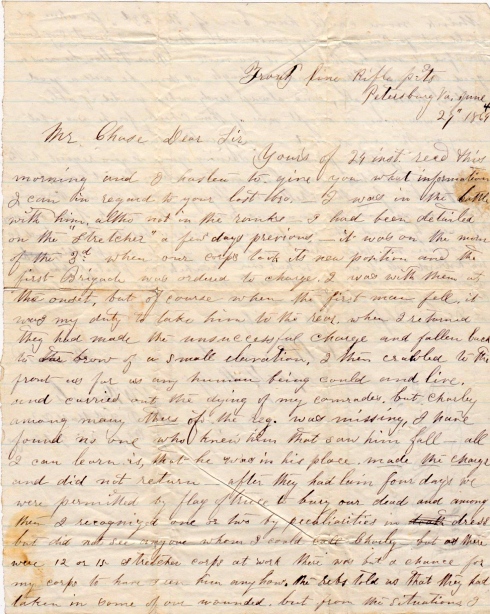 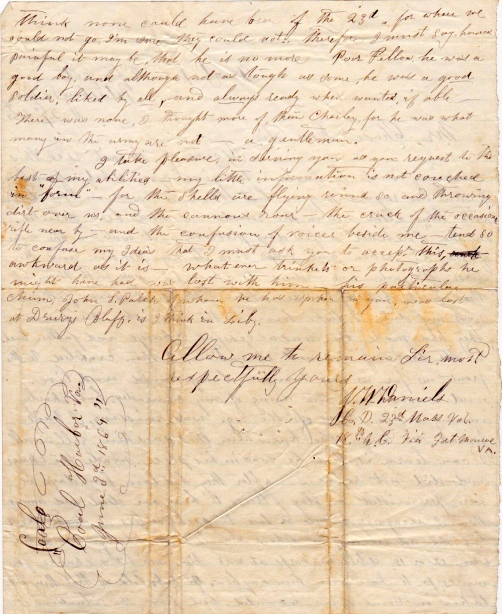 Saving history one letter at a time.

Saving history one letter at a time

Saving History One Letter at a Time

by Charles A. Frey

The Civil War Letters of Will Dunn

The Letters of Rufus Melvin Graham, drummer for the 50th Mass. Vols.
The Civil War Letters of Benjamin Curtis Lincoln while serving in the 39th Massachusetts Volunteers
"Though distant lands between us be"

"Tell her to keep good heart"

The Origin of Bluemont Central College

"May Heaven Protect You"

Lt. Commander in the US Navy during the Civil War

Fighting with the Irish Brigade during the Peninsula Campaign

"Till this unholy rebellion is crushed"

"I Go With Good Courage"

"This is a dreadful war"

Saving History One Letter at a Time

The Diary of George W. Shue

No Cause to Blush

This is Indeed A Singular War